It's not often that one gets to be in a meeting with Vinton Cerf â€” who's credited as the "Father of the Internet", and holds the official job title of "Chief Internet Evangelist" at Google. (No, I'm not kidding.) 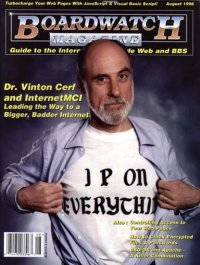 So when I was invited to a research meeting with him, my mentor Bill Schilit, and others at Google, I was totally in awe. Of course I can't discuss what we talked, but the little kid in me was awe-struck enough to want to write a blog post simply mentioning it! ;)

I remember having seen him first about 9 years ago. I was a sophomore at Bombay, and I heard from the ACM community that Vint Cerf was to give a talk at SNDT, Churchgate. It was examination time, and as hard as I tried, I couldn't get anyone else enthused enough to make the hour-long journey to listen to Vint Cerf's talk. In an engineering school with over 800 students, I had expected to find at least a few takers. None. Nada. Zilch. Everyone was too concerned about their examinations to find time to listen to the Father of the Internet. I gave up, took the train, and went to the talk, all alone. It was totally worth it, I recollect his ambitious Interplanetary Internet project back when he was at MCI.

I had never imagined that 9 years later, I would be attending a meeting with him. It's not a dream come true, because I had never even dreamt it would be possible to share a table with Vinton Cerf.