Google recruiters use Google to search for recruits for Google. And how do I know? I found out because of another Google product. The irony is that I've been at Google, and I will be at Google, so I'm not exactly who they're looking for. So, all this, and the search was a failure, then?

Here's what happened: I'm in the habit of checking my web server logs every once in a while to see which pages are popular, where my users are coming from, what keywords they type into search engines to find me, and sometimes just to stalk my stalkers. ;) For this, I use two great tools, StatCounter and Google Analytics. (StatCounter is the better of the two, by the way, but they have a last-500-visitor limit, so I need to check my stats at least daily.) 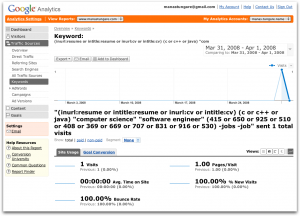 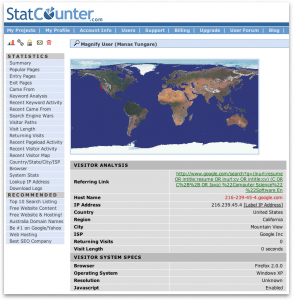 The IP addresses show that the request came from Google's Mountain View headquarters. The query shows exactly who they're looking for. Interestingly, they seem to be hiring locally (the numbers in parentheses are all telephone area prefixes in the San Francisco Bay Area.)

There's so much Google involved in this story, it's scary.

Last night, I left my cell phone in my car. As with most of my follies, I realized it a few oh-no-seconds after I got home, but only after I'd taken off my jacket, gloves, cap, shoes and socks. It was an unnecessary walk in below-zero temperatures, but it got me thinking about phones, identities, what's wrong about it all, and how it could be made better.

The problem is this: phones and phone numbers are tightly coupled together [1]. No wonder people keep their phones close to their heart -- their personal identity is locked in it. If I don't carry my phone, there's no way to answer calls that I receive at that phone number. I can perhaps check voicemail from another phone, but still cannot make and receive phone calls under my own phone number.

Now compare this to email: if you go on a vacation without your own laptop computer, it is still possible to "borrow" someone's random computer and check your messages. The messages you send will have your ID (your email address) attached to them, and the people you interact with will have no idea what machine you used (and there is no need for them to know.)

Why can't we have a phone identity (our phone number) separate from the device (our phone) that is used to access it? If I forget my phone in the car overnight, I should be able to just add my phone identity to the home phone. That way, all calls that would have been received by my handset in the car will now be received at my home phone, and callers/callees will not know a thing. The next morning, I would re-establish my identity on my cell phone, and things will be back to usual.

I'm not a big fan of call redirects: that puts a temporary bandage on the problem instead of actually solving it. I don't want my identity routed to another identity: I want to be able to use my own identity wherever.

This would also open up the market for multiple-identity phones. A couple can add both their identities to a single home phone in the evening, while they carry individual cell phones during the day. Forgot your cell phone at home? No problem, just borrow a loaner phone from the office receptionist and use it all day long (just as you would borrow a loaner security badge if you forgot yours). It would also make it easy for a group of people to be able to respond to a single phone call, e.g. despatch services for emergencies. A group of doctors could share a single phone number. Whoever is on emergency call duty would add the group phone number to his/her cell phone, and remove it after the duty ends.

Historically, a phone number has been tied to a phone, mostly because of technical constraints, beginning with the days of the human-operated telephone exchange. Email has shown that identities (email addresses) can be independent of devices (computers), that many identities can share a device, and many devices can be used by a single identity.

It's an easy conceptual step forward to move to the many-to-many model instead of the current one-to-one. But there is a tremendous amount of change required of the infrastructure, and it won't be cheap. But since I don't happen to be in the business of implementing it (at least not yet!), so I'll just write about this idea and hope that someone picks it up. Maybe someone will listen, and like it, and implement it.

[1] The more pedantic among us will point out that GSM phones keep the user's identity on a SIM card, and CDMA phones maintain a single ID tied to the IMEI number of a phone. Although possible, that does not make swapping identities across phones easy: in the first case, you must have your current phone handy, which does not help solve my problem of having left the phone in the car overnight, and the second one requires a long phone call to the carrier to make the change. Neither is as quick or handy as the method I envision.

How do I eat Pringles chips out of a can?

I ask you, the blogosphere, to enlighten me on the best way to eat Pringles that does not involve a bowl. The Pringles can is one of the iconic designs of modern times â€” uniformly-shaped potato chips in a tube â€” that seems to value form over function.

Let's admit: eating chips is a secondary task for most Americans. These are snacks people munch on when they're doing other things. Thus, these chips should be easy to grab with one hand and have the other hand free for the television remote, steering wheel or keyboard/mouse. At the same time, it is important that chips don't spill, or worse yet, crumble in your hand. So what's the best way to eat them without needing a bowl? (because using a bowl would just be weaseling out of this problem into one already solved in The Textbook.)

The first few chips are easy. (Isn't that the case with everything? :) ) They're within the grasp of your fingers, so it's no different than plucking a few chips from a bag. It's after the top few disappear that the problem starts. Should I force my hand into the can? Should I invert the can so the chips fall out into my hand? Should I tilt the can ever so slightly and tap on the side to have the chips exit one by one instead of stampeding all over themselves?

I've tried to dig in with my hand to get to the next few, but my hand is too big to fit inside the can, and it's probably not a good idea anyway. I shudder to think of the day I'm in an Emergency Room with a Pringles can wrapped around my wrist, with $200/hour doctors cutting off an embarrassing roll of cardboard from the one organ that distinguishes men from apes. No, excavating anything but the top few is a job for professional archaeologists.

I've tried inverting the can with the lid on, so (I hoped) the chips would all accumulate on the lid, and then I could simply open it up and eat a few. The problem is, the quantum stable state for potato chips is a pile of crumbs. Inverting the can gets all the crumbs to the bottom of the can, and when the lid is opened, that's what comes out first.

I've tried tilting the can at a precise angle and knocking on the side until the top few chips make their way slowly out the door. This sometimes works, but takes a long time, and very skillful knocking/tapping/flicking to get the right number of chips out of the can. Often, you'll spend five minutes tapping unsuccessfully, then, out of a burst of frustration, you'd tap just a little bit harder, and have Pringles rain upon you. No go.

Dear Mommy taught me to search the Web before posting random questions to total strangers, so I did my homework. Here's an innovative method of eating Pringles, but I'm no chopsticks ninja. And eating chips with chopsticks vaguely reminds me of the Seinfeld episode with George eating Snickers with a knife. You get the point, sort of.

So my question to you is, what's the best way you've found to eat Pringles out of a can without spilling any crumbs, using a minimum number of hands to do it? A second, deeper, question, from my obvious position as a design and HCI person is, why has such a design resisted change over so many years despite being so hard to eat from?

A Heads-Up Display for Social Networks

I often find myself talking to people who I should know (in theory), but for some reason, in practice, my neurons refuse to make the right connections to remember these connections. Wouldn't it be great if someone designed a heads-up display based on your social network?

This is how it would work: when I activate it, and it notices I'm talking to someone, it would do a quick scan and tell me his/her name. That would be a life-saver, and would avoid the first five minutes of the 20-Questions game I have to play every time this happens (while making sure that the other guy (or girl!) doesn't notice I'm playing the game in my mind.)

It could also tell me how I know that person, because sometimes I remember the name, but nothing else. Wouldn't it be helpful to know that I'm talking to John Doe, who went to the same high school as I did, and who is now President and CEO of a Fortune 100 company (note to self: graduate soon.)

Not just names, it could even tell me more about the person I didn't already know (or, in the more likely case, I've forgotten.) I'd love to know that my friend John Doe is no longer with his (now ex-) girlfriend Jane, so that would cut out a lot of awkward conversation. Knowing that he just went on a cruise to Alaska would instantly give us a topic to chat about. Knowing that the lady on his arm is not his wife would probably also help. I could ask him about our common friends and if he were in touch with any of them. And then he could use his heads-up display to pull their details up and tell me what I'd already looked up, but that's another story.

So why isn't something like this on the market yet? I'm sure there would be throngs of people lined up outside the offices of the company that makes the first such thing. And if they try to patent it, you can cite my blog post as prior art. You're welcome.

Press Coverage of my Intern Work at Google

It's been exactly a month since my feature launched on Google Books. I went on an ego-surfing trip to see who had covered it. Here's what I found. 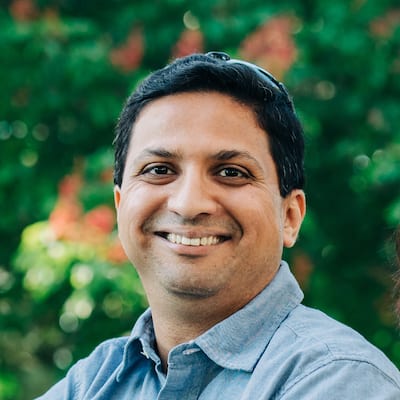