It’s not funny how many cultural, socio-economic, and even religious assumptions can be implicit in the design of a simple form. Here’s the form I was greeted with today when I tried to log on to ShareBuilder.

Note, I don’t want to single out ShareBuilder here; many other companies have such silly forms as well. But it just so happens to be the form I chanced upon today. 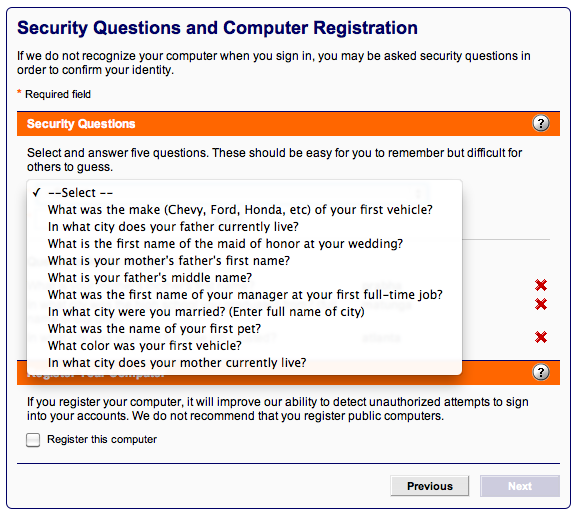 Here’s a list of the assumptions made by whoever was tasked with designing this particular form. It’s quite easy to see why these assumptions are not universally applicable. Though not outright discriminatory, these questions suggest a subliminal discriminatory preference for car-owning, married people, both whose parents are currently alive. And no, you cannot create your own questions.

We have—thankfully—grown out of the age of blatant racial or gender discrimination (for the most part). But behind every user interface widget and every design decision we make is an invisible representation of the subconscious biases we hold in our minds. If you build a team comprising only of like-minded individuals from similar backgrounds, this is the kind of sign- up form you get. If your team includes people who have experienced a rich diversity of life experiences, you can bet their designs will be much more universal.